A cataract is clouding of the lens in the eye of any degree and can occur under the influence of many factors. Normally the lens is transparent and has an extremely important role in the refraction of the eye.

Acquired cataracts occur during life influenced by many factors. The most common cause of cataracts is the aging of organisms and this type of cataract occurring after the age of 60 is called a senile cataract.

Clouding of the lens after the age of 60 is the result of metabolic disorders and nutrition in the lens. The lens is made up of 60% of water, 34% of proteins (alpha, beta, gamma crystalline), and 1% vitamins, glucose, lipids, and trace mineral. The lens has neither blood vessels nor nerves and it is nourished by means of diffusion and osmosis through the capsule. The nutrition of lenses is disturbed in the course of aging, excess fluid enters the lens and blurs it. Senile cataract is thus formed, which can be incipient, mature, and hyper-mature. There are other forms of cataracts: (intumescent, brunescent, etc., which describe the degree of maturity and its appearance.) 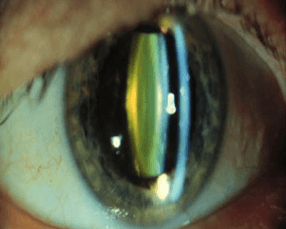 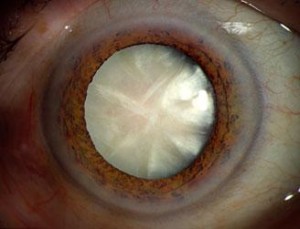 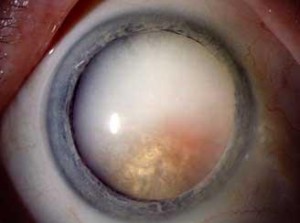 Cataract surgery is the most common operation performed on humans, especially in the past twenty years when this surgery has become very advanced thanks to the use of ultrasound, state-of-the-art equipment, and the application of intraocular lenses.

It occurs as a result of various eye injuries. After heavy contusions or eye injuries with an existing wound in the eye, a sharp object or foreign body can cause blurring of lenses. Blunt force trauma (contusion) causes cracking of lens capsule and cataract formation, and such surgeries are not emergencies, and in some cases can be stationary.

Much more serious is traumatic cataract after penetrating eye injuries, especially with the presence of an intraocular foreign body. In these cases early eye treatment must be performed, cataract surgery is done, removal of the foreign body, and possibly new intraocular lens implantation. In some cases, the lens is placed in the second phase, after a few months.

The original video of Prof. Veselinovic – Operation of traumatic cataract with the extraction of foreign body.

Patients with high diabetes are exposed to the more frequent occurrence of cataracts in relation to the rest of the population. Cataract surgery in diabetic patients carries a slightly higher risk of intra- and postoperative complications. If detected on time, and done on time by an experienced surgeon, the risks for the occurrence of complications are minimal. In some cases of diabetic patients, despite successfully performed cataract surgery, the expected visual acuity is not achieved due to the accompanying damage to the retina, as a consequence of diabetes.

Most kidney diseases lead to both metabolic disorders and disorders of electrolytes in the lens, causing cataracts. In particular, patients who are undergoing dialysis have a frequent occurrence of cataracts. These patients require special preoperative preparation and cooperation with nephrologists, therefore the effect of surgery is usually excellent.

Very often, increased eye pressure (glaucoma) may be associated with cataract. It is also a very common occurrence of cataracts in patients who had previously done glaucoma surgery. Due to the presence of two concomitant diseases of the eye, these patients need to be particularly considered and operated after appropriate preparations. In some cases, it is necessary to carry out a simultaneous surgery of both the cataract and glaucoma. These surgeries are performed by an experienced surgeon who must possess the appropriate instruments, equipment, and lenses.

Other causes of cataract

Exposure to high doses of radiation, the effect of ionizing rays, electricity, and a large number of inflammatory diseases of the eye, can all lead to the occurrence of cataracts. Patients with chronic and recurrent inflammation of the cornea (Keratitis), the iris (iridocyclitis), retinal and vascular structures of the posterior segment of the eye (Uveitis, Choriorethinitis) can be a complication of the underlying disease and cause of cataracts. Today, discussion points increasingly include inadequate diet and heritage factors as possible contributors to the formation of early cataracts.

Clouding of the lens in children is not so often and occurs as part of some congenital genetic disorder or as a result of the effects of certain harmful factors during pregnancy, which can lead to lens blurring. Therefore, pregnant women, especially in the first three months of pregnancy should not take any medications that are known to be harmful to the unborn child, should not be exposed to any radiation therapy or diagnosis, and should avoid severe cold, especially with viral etiology. Embryonic development of the lens ends after the third month and if during this period some detrimental factor operates, cataract may be developed. Today’s attitude is, depending on the degree of the cataract in a child, that it should be operated on as soon as possible, sometimes even during the first year of life. Congenital cataracts in any case should be operated on up to the age of six because the sight in humans is formed by that time. Only small degree congenital cataracts that do not affect visual acuity can be operated on later.

At the beginning of the surgery usually, two incisions are made, one of 2.8 mm and the other one smaller. In recent years, the operation is performed through a smaller incision of 1.8 mm and 1.4 mm (micro-incision operations). Complete surgical procedure is performed through the wider cut with several preparatory phases and applying ultrasonic fragmentation of the lens. The top of a special ultrasound probe is introduced into the eye and the full content of the lens is first emulsified (phacoemulsification), and then removed from the eye (aspiration). Only the posterior capsule and part of the anterior capsule forming a capsular bag remain from the natural lens. In this space with the help of special injectors, “an artificial” lens is inserted in the place where a natural or blurred lens was previously contained. Because of the small incision in the cornea, there is no need for placing sutures. At the end of the surgery, approximately one drop of antibiotics is administered in the eye which is then closed with sterile gauze and the surgery is over. 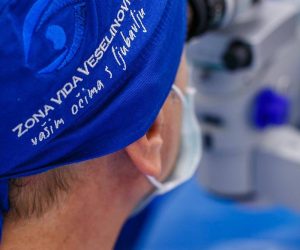 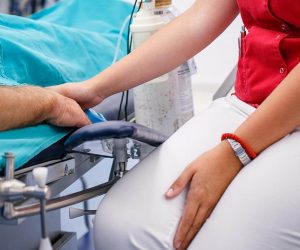 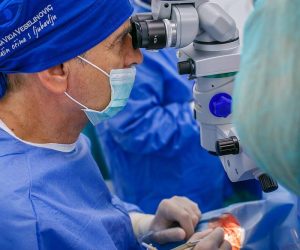