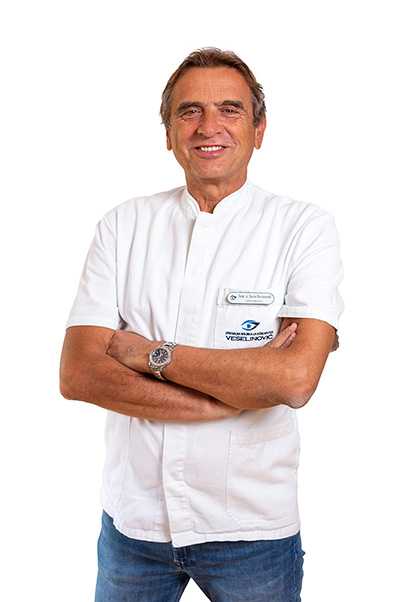 During his studies, he was a demonstrator in a physiology course. He received his residency in ophthalmology in 1983 and simultaneously started working at the Military Hospital in Nis, where he spent a year and then continued his specialization studies at the Department of Ophthalmology of Military Medical Academy in Belgrade, and in 1985 passed his Specialization Exam with excellent grades. After completing his specialization, he returned to the Military Hospital in Nis and worked as an Ophthalmologist until 1993 when he moved to the Department of Ophthalmology, Clinical Center in Nis, and received the title of Assistant. Afterward, he received the academic title of Assistant Professor, Associate Professor, and Full Professor at the Faculty of Medicine in Nis in 2001, 2007, and 2012, respectively.

After completing his postgraduate studies in Ophthalmology, Faculty of Medicine in Belgrade, 1991, he successfully defended his Thesis entitled “Analysis of Etiological Factors and Treatment of Anterior Ischemic Optic Neuropathy”. He defended the Doctoral Thesis entitled “Differential Diagnostic and Prognostic Value of Visual Evoked Potential and Electroretinogram in Inflammatory and Ischemic Optic Nerve Disease” in 1997 at the Faculty of Medicine in Nis.

Upon his arrival at the Clinic for Eye Diseases Nis, he was appointed the Head of Surgical Block, given the fact that he was proactively involved in surgical procedures in the previous period. He was the first to introduce the intraocular lens implantation after cataract surgery by the means of the classical method in 1995 when the modern surgery at the Eye Clinic of Clinical Center in Nis began.

He further developed in cataract surgery, and in 2003 he launched a modern ultrasound cataract surgery in this institution. Before that, he spent a month attending professional training in England, at the county hospital in Canterbury and Phaco Training Course in Uppsala, Sweden. For his contribution to the introduction of new surgical methods and improvement of work of the Eye Clinic of Clinical Center in Nis, he was awarded in 2006 a charter of the Serbian Medical Association, Nis Branch. Since 1999 he was the Head of the Surgical Department when he was appointed Director of the Eye Clinic of Clinical Center in Nis, where he remained for the following 12 years. As a Full Professor of the Ophthalmology Department and the teacher responsible for specialization, he actively participated in the training of a large number of doctors at the clinic, as well as throughout Serbia. He was a member of the Master’s Degree Board at the Faculty of Medicine in Nis, from 2003 to 2005, and a member of the Council of the Faculty of Medicine from 2007 to 2009. He successfully completed lecturing at the Training Course of Ophthalmologists in Modern Cataract Surgery in Pirot, Vranje, Prokuplje, and Zajecar, and trained ophthalmologists in Prokuplje to perform independent glaucoma surgeries.

Prof. Dragan Veselinovic MD PhD. has successfully been engaged in scientific work, in the course of his professional career, including over tens of thousands of surgeries. According to data from 2012, he is the author and co-author of 157 papers in total, 44 of which are papers printed in their entirety in international and national journals and 113 presented at international and national scientific conferences. He is the author of one monograph, two chapters in monographs, and two chapters in textbooks. He has made the scientific competence index of 143.7. During 2005/2006, the Ministry of Health appointed him a Member of the Preparatory Committee for the formation of the Serbian Medical Chamber. As a representative of the Southeastern Region of Serbia, he gave his contribution to the formation of the Serbian Medical Chamber and successfully organized the first elections for the Assembly of the Medical Chamber for the Southeastern Region. From 2008 to 2010 he was Secretary-General of the Serbian Medical Society, Nis Branch, and since 2011 the President of the SLD Branch in Nis, where he has actively been participating in the organization of professional meetings and promotion of doctors before this association.