Retinal detachment presents an important cause of blindness and the decrease of visual acuity. It is one of the most urgent conditions in ophthalmology. The sooner the patient contacts an ophthalmologist, the greater are the chances of a successful surgery and good visual acuity.

Retina is a thin light-sensitive layer of nerve tissue in the anterior eye that sends visual messages through the optical nerve to the brain. Light rays focus on the retina via the cornea, pupil, and lens. The retina transforms the light rays into impulses that travel through the optical nerve into our brain, where they are interpreted as the pictures we see. Healthy, intact retina is crucial for clear vision. When the detachment of retina occurs, its sensory part gets separated from its base, retinal pigment epithelium. This is an URGENT condition that requires surgical intervention and, if not treated on time, it can cause a permanent loss of vision!

There are three types of retinal detachment:

2.Tractional retinal detachment – that occurs due to the existence of small membranes or scar tissue on the retina surface. These membranes pull away the retina, thus causing its detachment from the RPE. This type of detachment is less common, and it affects persons with a severe form of diabetic retinopathy.

3. Exudative (serous) retinal detachment – is rare, and is frequently caused by other retinal diseases, including inflammatory disorders and eye injuries (traumas), kidney diseases, Lyme disease, eye tumours, as well as a very high blood pressure. With this type, liquid gets accumulated under the retina, but with no tears on the retina. It can affect both eyes. 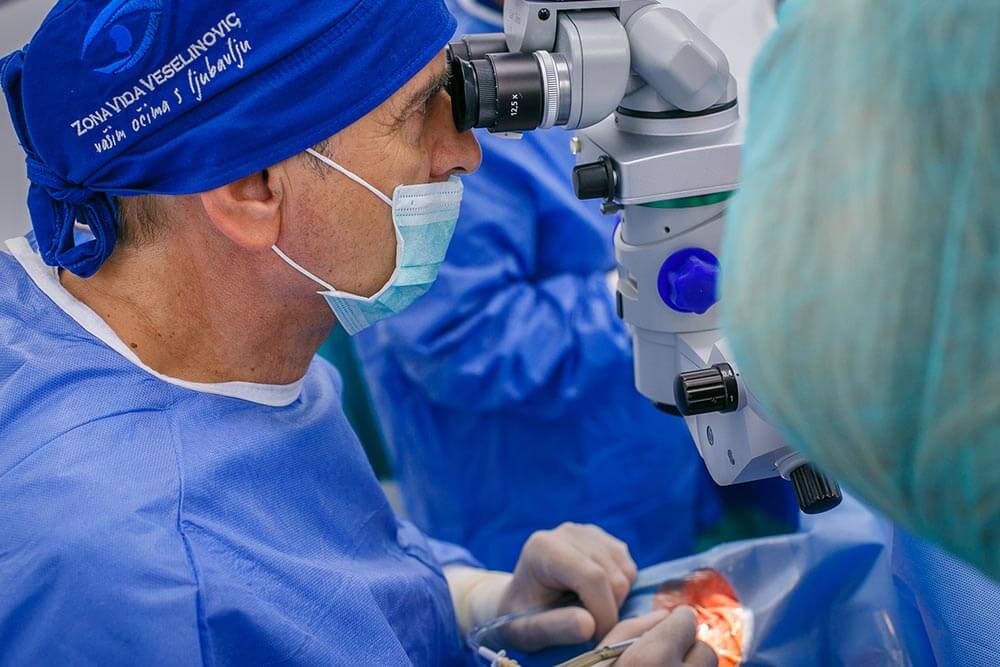 A retinal detachment is also more likely to occur in people who:

– have had a retinal detachment in the other eye

– have a family history of retinal detachment

– have had cataract surgery

– have other eye diseases or disorders, such as retinoschisis, uveitis, degenerative myopia, or lattice degeneration

– have had an eye injury

Symptoms of retinal detachment include:

If a person suspects of having symptoms of retinal detachment, they should immediately contact their ophthalmologist, because the sooner the person has a surgery, the prognosis for the recovery of eyesight on that eye is better.

The treatment of retinal detachment

In case of a retinal detachment, the surgery should be done as soon as possible because it increases the chance of a good visual acuity on that eye. There are several types of surgeries and your surgeon will decide which procedure is the best for you.

If the retina has not yet started to detach, but there are only tears and if the patient came as soon as they noticed the first symptoms, the occurrence of the detachment can be prevented by a laser. Then, small burns are made around the tear in order to “weld” the retina back to its place.

However, it is usually necessary to perform the surgery called vitrectomy that implies the removal of the vitreous body from the inside of the eye. During the vitrectomy, an eye surgeon makes a small incision in the sclera, then, using a small instrument, penetrates the eye and removes the vitreous body, the gelatinous mass that fills the most of the space inside the eye and gives the eye its round structure. Upon that, gas or oil is placed inside the eye as a substitute to the vitreous body in order to return the retina to its proper position, because they mechanically push the retina back towards the eye wall. In the following period, eye generates liquid that gradually replaces the gas within 2 to 8 weeks, whereas a balloon of silicone oil requires a subsequent minor surgery during which the oil is removed from the eye. The vision is blurry in the period of the air or oil presence.

In order for the surgery to be successful, it is necessary to follow the advice of the physician regarding the head position during the following ten days, which implies a certain positioning of the head in order to have the oil balloon support the retina in the best manner. This can present the hardest part of the recovery after the surgery, but it is very important and needs to be perceived as the second part of the surgery.

This surgery is usually done in local anesthesia. You are awake all the time, but you will feel no discomfort. You will not see the surgery and the other eye will be covered.

The degree of the visual acuity after the surgery is not always possible to be predicted. Sometimes a couple of months are necessary in order to get the final result. Even under the best circumstances and after multiple attempts, each patient is different, and some retinal detachments are harder to be treated than the others. On some occasions, even after a successful surgery, the visual acuity does not become satisfactory. The result is the best if the patient has a surgery before even the macula (the part of the retina in change of the fine, precise vision) gets detached. Because of that, it is of great importance to immediately contact your eye doctor if you notice a sudden or gradual increase in either the number of “floaters” and/or light “flashes” or dark curtains over the field of vision.

The greatest benefit of this surgery is certainly the prevention of blindness of the affected eye. Modern surgery can successfully treat an enormous percentage of retinal detachments, although sometimes it is necessary to perform a re-operation. The success rate of the retinal surgery is 90% for one operation, so one in ten patients requires re-operation. The reason for that are new retinal tears that are created by the scar tissue pulling the retina. Usually, the cataract surgery is performed together with the retinal detachment surgery and artificial lens is inserted into the eye.

What can you expect after the surgery?

After the surgery, it is normal to feel discomfort in the eye, but it is usually resolved by simple painkillers such as paracetamol or ibuprofen. The eye will be red and eyelid swelling might occur, as well as increased lacrimation, but these symptoms will gradually disappear. The vision on that eye will not be clear in the first couple of weeks, but it will gradually improve. For the final visual result, it is necessary to wait for a couple of weeks or months and you will maybe need new glasses.

After the surgery, your eye doctor will prescribe drops that will reduce inflammation, drops for the prevention of infection, and sometimes, additional drops for maintaining normal eye pressure. You can have a shower but avoid spraying water close to the eye. You must not travel by an aeroplane while the air bubble is present in the eye, because of the possibility of the increase in the eye pressure. Inform your anaesthesiologist on the presence of the air in your eye if you need to have a general anaesthesia surgery.

When can you return to work?

Most people need to take a sick leave of minimum two weeks before they return to work. Sometimes this period has to be a bit longer, depending on the type of work you do. While air or oil are still present in the eye, vision is blurry and affects the ability to estimate the distance of objects.